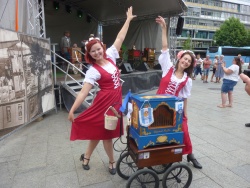 Let me tell you again about the fair we´ve been invited to for several years now: just in contrast with last year's really bad weather conditions this year's 24th participation of organ grinders on the fair showed up with a grey but dry morning and temperatures around 20°C. The weather cleared up throughout the day and the fair had lots of visitors.
Bruno Leoni invited some 20 players to show and play their instruments to the public. After a warm welcome by Renate Ulrich (one of the organisators of the fair) and Bruno, we split up in groups of 2 or 3 grinders and circulated the whole area.
The public interest in organs is still high in Switzerland and we had a lot of good conversations with interested folks about our organs, how they function and how to become a grinder. The grinders started playing at 10:00 h in the morning and ended up at 16:00 h. Afterwards we had our usual meeting at the beertent "Dorfplatz-Beizli" and were invited by that place's landlady Esther for a meal and some drinks.
If you´re around in Switzerland at the time of LUGA, just drop by and listen to all the different types of organs Bruno invites because of their differences, every time a well chosen mixture. Besides that you´re able to experience typical Swiss stuff like "Säulirennen" (a pigs' running contest) or St. Bernhards dogs and their puppies.

Watch a selection of photos. 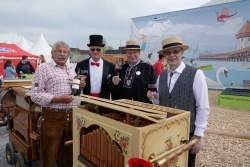 Organ owner and -aficionado James Dundon has launched an internet radio station that will undoubtedly become the favourite station of every enthusiast of mechanical music! 24 hours a day, you can enjoy the music of hundreds of different instruments on http://www.mechanicalmusicradio.com/. (Do consider to make a donation, as making radio costs money!)

Take your agenda and mark the following event: from 10 till 19 August 2018 there will be open days again at the premises of Decap Herentals with various artists and innovations, presented in the organ building. The circus of the Ronaldo family will be present again! More information about this happening will be available in springtime. 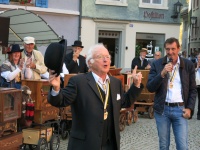 As I told you on the last year´s occasion of hela, Bruno Leoni, responsible for the organ players at that traditional fair and trade fair in Switzerland, invites all players personally. This year there were 32 organs present. After the bad weather on the last occasion this October did it´s best to give the grinders a warm welcome - sunshine after the morning fog was guarenteed and this gave all of us a lot of audience. After breakfast in Restaurant Castillo, which is offered for free by all of the Sponsors and Silvia Blaser, secretary of the festival´s committee and owner of "Hotel Bahnhof" and the speech of Raffael Blaser, president of the OC the grinders were sent out to their locations all over the fair. From 10:15 h we had a happy grinding with lots of spectators and some good conversations with a bunch of organ-interested people in the audience. This year´s service at the church was accompanied by Esther Studer and Christian Schuhmacher who are part of the best Swiss grinders playing synchronously on mechanical organs - sad they had no chance to join us for our breakfast while they were "on duty" at the holy mass and we had no chance to listen to them there!

At 15:30 h the players gathered at the market place in the old town for a concert of all makes of the organs. The lined-up organs and their players were introduced by Bruno and the Vice President of the hela festival´s committee, Mr. Roland Kaufmann gave a warm goodbye to the participants followed by dealing the "wage" for them, a big pretzel from the local bakery Maier and a big "Thank You" to Laufenburg Tourist Information and all other sponsors of the festival. Bruno presented a selection of the organs of the different kinds – there were at a total 30 different instruments from 16 organmakers present, with some of them self built - and asked the listeners to give a good ear to the difference of sound of the various makes which reached from a small American-made roller organ over a 45-key barrel-organ built by Bacigalupo at Berlin in 1912 up to newer organs of Raffin (Ueberlingen) make. After storaging the organs in their cars and a big good-bye to those leaving at that time the rest of the grinders met again at a restaurant to share their experiences.

Next year hela will celebrate its 70th anniversary and the organs will participate for their 30th time. We´re ready to go for it, Bruno!

Watch the photos of hela here!

This information is provided 'as is'. The society cannot be held responsive for errors.